The short video below demonstrates how to open an automation lane:

Automation is used to automatically change the setting of a knob, based on the time of the timeline. For example you might want to increase the volume of a delay effect during the “chorus” part of a song, or automate the master fader to make a smooth fade-out at the end of a track.

In Real-time automation the parameter is put into a “record” mode. While the transport is rolling, the user moves a knob, and these moves are recorded.

In the Mixer window below every fader there is an automation button dedicated to that fader because this is a very commonly-automated control (circled in red, below).

( this button only affects the automation mode of the fader )

Additional parameter automation can be accessed from the the track’s header: click the “A” button to view fader and mute automation. Under “Processor Automation” are EQ parameters, Compressor parameters, and plugin parameters. You’ll find the Pan and bus sends under “POST”. 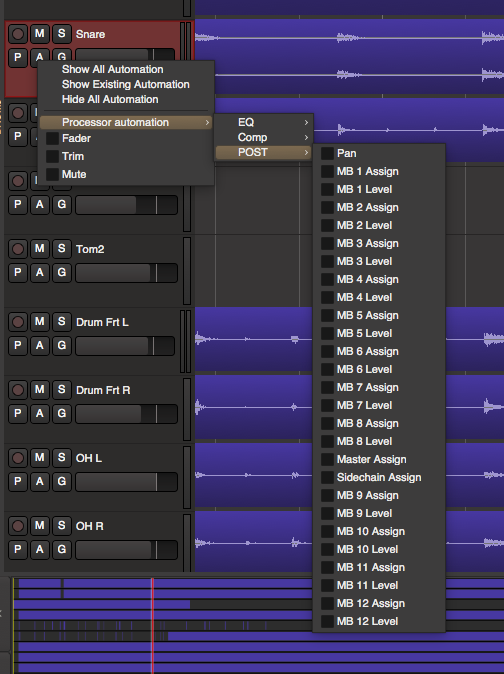 Here is a description of the modes:

When automation is recorded in real time, the automation data points are “thinned” so that only enough control-points are created to adequately capture the moves. The points will appear very sparse if the control is moving slowly, and will be created very close together during fast moves. The aggressiveness of thinning can be adjusted if necessary via menu Edit>Preferences>Misc.

*Tip: “Write” automation is a quick way to copy settings from one place to another. Locate the playhead while the parameter is in “play” to pick up the value you want to apply somewhere else. Now change the mode to Write, and locate to the new place. Then play through the desired section to apply the setting.

Punching in your automation with “Touch” mode:

*Automation is only recorded during forward playback. However it is possible to record automation while the transport is looping! Using this feature you can audition several different passes of the automation. When playback is stopped, the most recently-recorded moves will be kept. For example, if you loop 3 times and then stop halfway through the looped section, the resulting automation will be the first half of the 4th pass and the last half of the 3rd pass.

Automation may be graphically edited using either the Draw, Grabber or the Edit (Contents) tool. The rules for each are slightly different (and may change in the future)

*Note: The Grabber tool can grab an automation point, and move them up or down, but it can’t move their location in time.

Clicking with the Draw tool will create the first control point, and also draw a line to the very beginning of the track.

*Note: Using the Edit tool, you can click in empty space, and begin a “box selection” to select multiple points at once. You can then click on a point to move them all, or you can press Delete(or Backspace) to delete them together.

*Note: Remember that in order for the automation to be auditioned, the parameter must be in “Play” mode. You do NOT have to be in write or Touch mode to graphically edit the automation though.

*Note: Past the extents of the automation line, the “Play” value is the value of the last control point. 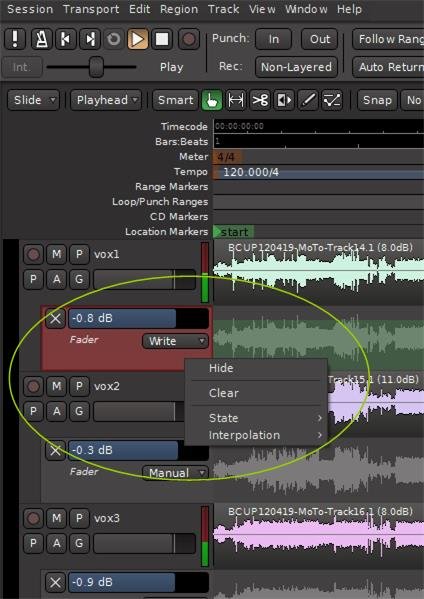 Automating Mix Buses
Normally the mixbuses are not shown at the left of the screen with the track headers. This is because mixbuses do not store audio. While automation of the mixbus fader can be selected on the mixbus strip in the Mixer panel, it is sometimes necessary to automate other functions on the mixbus.

To display a mixbus at the left along with the track headers so that its parameters may be automated, first open the “Editor List”: 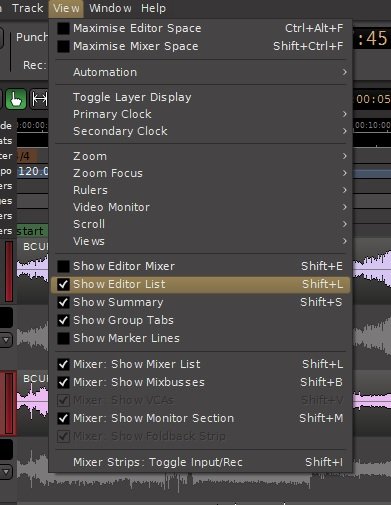 In the Editor List make the desired mix bus(es) visible by checking the “V” box: 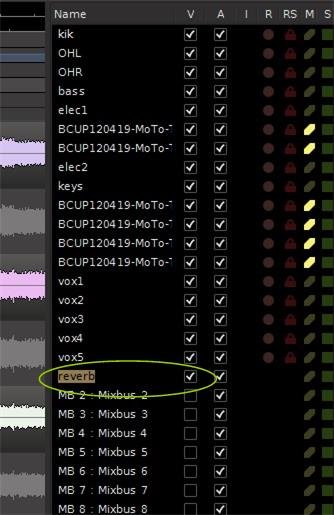 The mixbus header will now be displayed at the left along with the other track headers. Clicking on the “A” automation button allows you to set up any parameter on the mixbus to be automated. 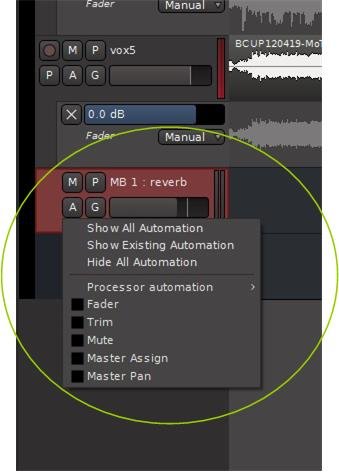