What is Polarity Optimization?

Polarity optimization is a way to take multi microphone recordings and automatically determine the best polarity setting for each of the tracks. The resulting analysis uses RMS level as the criteria for deciding the “best sound”. This mathematically optimized solution saves the user from comparing the many combinations generated by individually toggling the polarity switches of every track, in every possible combination.

Polarity optimization can be used in any situation where you have multiple microphones recording the same source, and it is important to find the polarity switch positions that generate the best sound.

To initiate the polarity optimizer, use the Range tool (or Smart Tool) to select a time-range. It is important to select a period of time that represents all of the instruments being played.

* A mixture of mono and stereo tracks may be used in the analysis. Left/right sides of a stereo track are treated as 2 separate mono sources.

Right click in the range, and choose “Optimize Polarity” from the context menu . 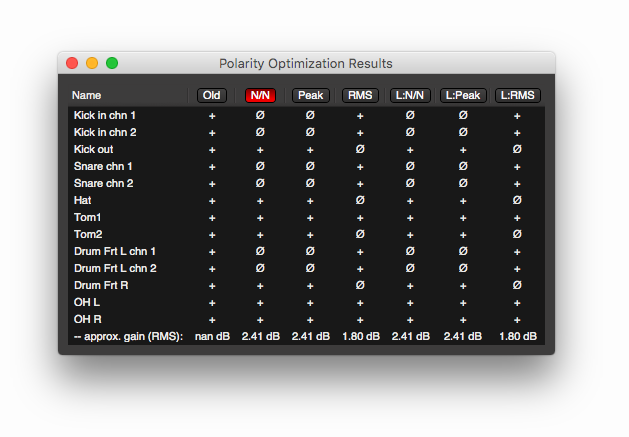 *The preprocessing options are applied only to the signal as it is being processed. The processing isn’t actually applied to the tracks, it is just applied while the the Polarity Maximizer is performing its calculations.

Explanation of the preprocessing options:

The preprocessing options help you make sure the the optimum polarity is found.

The Results dialog shows a grid of the selected tracks and the applied preprocessing options. The buttons across the top can be used to set (and audition) the calculated polarity settings, for each of the selected pre-processing modes.

In practice, you will find that most of the different preprocessing methods result in the same settings. In most cases, you should select one of the options that has the most “agreement” with the other selections. This indicates that the polarity settings are robust enough to apply even when subsequent level and equalization is applied.

Track name results list:
The name of all tracks used in the analysis are listed and whether the track has had its polarity inverted as a result of the analysis.

*The Polarity Maximizer applies a high pass filter (DC offset removal) to attenuate signals below 5Hz to remove it from the computation. This processing, like the processing options listed above, is not applied to the audio tracks.

The underlying technology of the Polarity Maximizer was provide by Jim Davis Ph.D. MIT, 2000 Dept. of Computer Science and Engineering at Ohio State University.
http://web.cse.ohio-state.edu/~jwdavis/