This section describes how to add tracks, buses, and VCA controls to your session. If you wish to import existing media, you should visit the Importing Files section.

What is the difference between Tracks, Buses and VCA’s?

Mixbus supports several kinds of objects that can appear in the editor and mixer windows:

*A note about buses, and Mixbus’s mixing workflow: Unlike typical DAW workflow, where track outputs are connected to other track(bus) inputs, the Audio Buses added here are not intended to be used as part of the mixer panning & summing. The goal of Mixbus is to revert to the buss-style mixing that is used in “hit-making” studios. It’s a subtle difference but very important. Audio Buses are best suited for utilitarian tasks such as “live” inputs from an external reverb, or grouping 2 similar tracks together for processing, before they are assigned to a mixbus or master bus.

There are 4 ways to open the “Add Track/Bus” dialog: 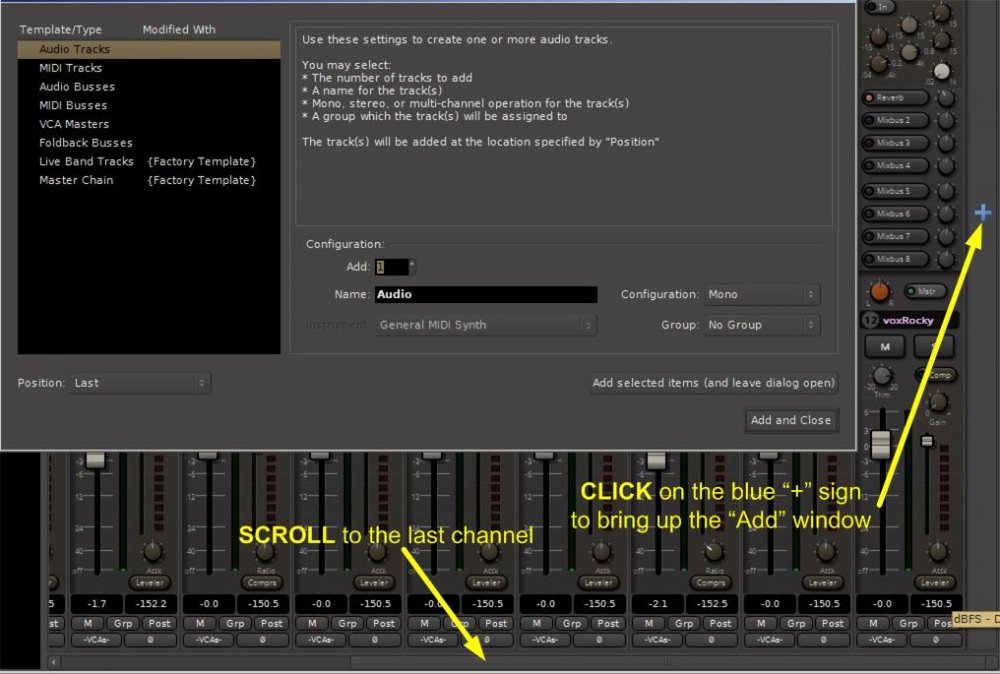 The “Add Track/Bus/VCA” dialog provides a list of the track types and templates that are available to be created.

At the top of the list, there are generic entries for New Audio Track, New MIDI Track, etc. When one of these items is selected, some of the options below will be provided:

If a Template is selected, instead of the generic “Add Track/Bus” selections, then you can view the description of the template, and any unused controls are greyed-out.

Mixbus supports 2 different kinds of templates, which both appear in this list:

At the bottom of the dialog, you’ll find 3 buttons:

*NOTE: You can re-order tracks anytime, using either the Editor List, or by selecting tracks and then using the Track menu { “Move Tracks Up/Down..” } to move the selected tracks together.