What is the region’s “Sync Point” ?

By default, a region’s “sync point” is the start of the region.

However, consider the case where here is some blank space at the start of a region which should not be trimmed away, but causes the region to align incorrectly with other regions. For example, imagine the case where a drum hit is not at the immediate edge of the region’s start, but slightly delayed after it. If you “snap” the region to the grid, you’d like the drum hit to land perfectly on the grid, not slightly off.

By defining a region’s “sync point”, you can align and snap regions with each other sensibly, while freely trimming the starts of the regions for crossfades and such.

By default, a region’s leading edge will snap to the grid but often this edge is not relevant to musical timing. By setting a sync point within a region (ex: on the downbeat) the region can be snapped to the grid in a musically meaningful way.

To set a sync point:

Select the region and place the cursor where you would like the sync point. Press the “v” key and a yellow line will appear. Now the region can be snapped to the grid using the sync point as the reference. 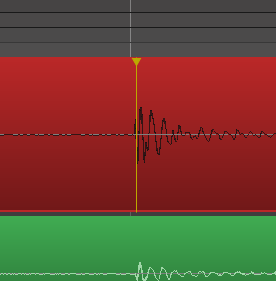 To move a sync point:

Simply repeat the procedure above (there can be only one sync point per region).

To remove a sync point:

Select the track with sync point then choose: Menu>Region>Position>Remove sync. (This effectively sets the sync point back to the beginning of the region)