A MIDI region is exactly like an audio region, except that the information inside the region is MIDI performance data, not audio.

*In the same way that audio regions have underlying audio files that are actually stored on disk, a MIDI region has a MIDI file in the session that it represents.

MIDI regions may be cut, copied, pasted, and trimmed in much the same way as audio regions. Region editing is accomplished with the same tools: the Grabber (Hand) tool and the Range tool.

There are 3 major differences with MIDI regions vs audio regions:

MIDI regions do not only contain MIDI notes; they also contain performance information such as pitch bend, aftertouch, controllers, etc. This has one side-effect: in order to draw controls (with the Draw tool), there MUST be an underlying region. MIDI data cannot exist on a track without an underlying MIDI file, and this is represented by a midi region in the track. If you record MIDI data, then a region is created to hold any notes or controls that you play into the track. If you want to draw notes or controllers, you must first use the Draw tool to drag a region, and then you can draw notes or automation into the region.

Using the Grabber (“G”) tool, you can right-click on a MIDI region and navigate to the MIDI context menu: 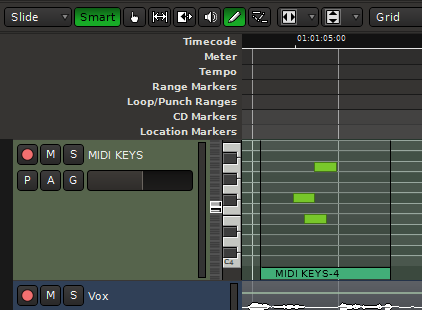 It was a design goal of Mixbus to edit MIDI regions “just like audio regions”. To some users this is going to feel inelegant. To others it will be a breath of fresh air.