These pages will discuss basic MIDI messages, devices, and connections. It is intended to give enough information to get you started. Much of the information is presented in a generic way, not necessarily directly related to Harrison Mixbus. For specific MIDI for Mixbus click here.

Musical Instrument Digital Interface, or MIDI, is a communication protocol that was published in 1983. The intent was to allow 2 instruments, from 2 different manufactures, to communicate with each other. One keyboard could be played while a second connected keyboard (with tone module) could sound the same note at the same time, doubling the performance.

It is important to know that the information being transmitted is not audio! It is “performance data” in the form of MIDI messages such as the note played, timing, velocity, etc.

A single device can implement any combination of controller, instrument, and/or sequencer features. For example, before computer sequencers were popular, it was very common to buy a keyboard that provided the keyboard, internal tone module, and sequencing features in one device. These are sometimes called “arranger” keyboards.

You may find tone module, tone generator, and sound engine are used interchangeably.

The MIDI language is transmitted digitally. The information carried in the messages are note on, pitch, velocity, program change, note off, and more. There are 2 types of MIDI messages; Channel messages and System messages. These two sub groups can be further broken down and will be explained below. These MIDI messages are sent to other devices via a MIDI cable. More on the MIDI cable a little later.

Channels Messages: Each channel message contains a channel assignment and as a result are assigned to specific channels rather than sent globally. With the capability to transmit (Tx) and/or receive (Rx) on 16 channels, the user is offered some flexibility. Once a channel is establish the channel messages will deliver instructions such as Program change, Note on, Note off, and more. With this you can send performance data from one controller, on one specific channel, so that that one or more specific MIDI instruments on the same Rx channel responds. 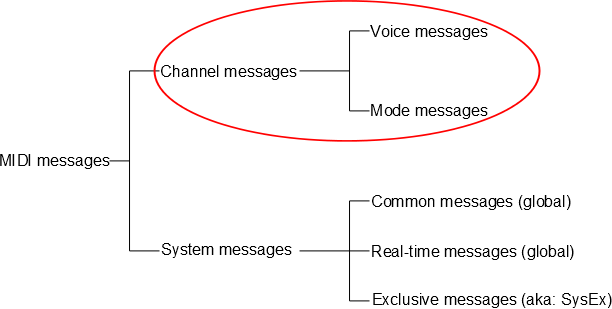 The “Voice” portion of the channel message is the musical performance part and contains information regarding the following:

The “Modes” portion of the channel message tells the MIDI instrument how to respond when it receives the performance part or the message.

With Multitimbral we are talking about many tones to produce a complex sound like a piano part, a violin part, or a drum part. These are sometimes called “programs”,“patches”, or “presets”. You can have many parts playing at once, each assigned to its own channel. Before Multitimbral there was Monotimbral, where only one part could be played. Multitimbral can replace multiple notes with multiple programs so that we may produce the sound of an entire band with one MIDI performance track.

16 part Multitimbral playback capability is not uncommon today. Also be aware some manufactures may call Multi mode something different. For example, the classic Yamaha Motif refers to it as “song mode”.

There are other commands that can be invoked with a mode message, such as reset all controllers, local control, and all notes off.

above: the MIDI panic button circled in red

System Messages: These messages are mostly global and as such do not carry a channel assignment.

System Common Messages are for all MIDI devices in a network regardless of channel assignment. These messages are things such as MIDI Time Code (MTC), MIDI Clock, Song Select, and Song Position Pointer.

System Real-time Messages are used for synchronization with all devices in the network that are clock based such as sequencers and drum machines. These devices follow a tempo and need to be in sync. The resolution of the timing is expressed as Pulses Per Quarter Note (PPQN).

System Exclusive Messages are not global. They operate more as a point to point type of operation. It’s kind of a catch all command that allows manufactures to use it for a whole host of things. For example a stored patch can be transmitted to and from equipment by the same manufacture. The manufacture can register their equipment with The MIDI Manufacturers Association so that they can obtain an exclusive SysEx ID so that only their equipment will respond to their commands. The code that one manufacturer uses to write a patch is going to be different from another manufacturer so sending a Yamaha patch to a Roland won’t do much good. This is because each manufacturer has their own unique way handling information such as patches.

General MIDI is not actually a message but rather a standard that specifies certain functionality of MIDI equipment. Without General MIDI, each manufacturer can assign whatever patch they wanted, to whatever storage location they wanted. This would make it difficult to use different equipment from different manufactures. For example, one manufacturer may have a French Horn for Bank 1 program 4, and another manufacture may have that spot reserved for Viola. But General MIDI says that Bank 1 program 4 shall be a Honky-tonk Piano. With this, when a command is sent from one device to another the musician can hope for a sound closer to their expectation. General MIDI 1 elaborated on this and added even more specifications to the standard.

The MIDI cable is unusual in that both ends have a 5 pin male connector. 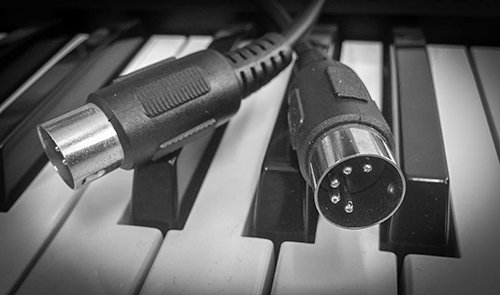 Sometimes this cable is called a MIDI DIN (Deutsches Institut fur Normung). The MIDI cable will carry MIDI signals in one direction only. If you need MIDI messages to return, then you will need a second cable.

The MIDI DIN cable characteristics are:

USB, FireWire, and Ethernet have become popular alternatives when connecting to computers. However, if you need the full feature set that MIDI has to offer you will need MIDI cables.

Often you will find 3 types of connections on MIDI equipment. 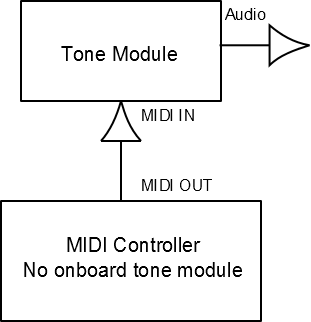 Fig. 1 above: A dedicated MIDI controller is connected to a tone module. This requires a MIDI cable. A USB or FireWire cable will not work. 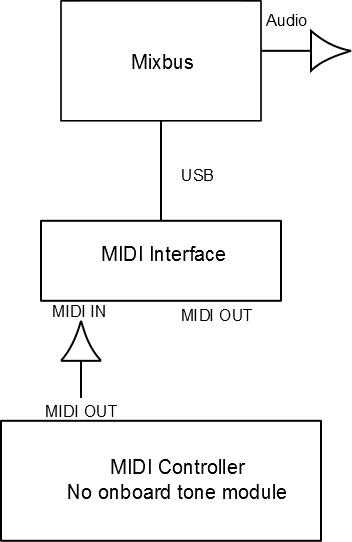 Fig. 2 above: A dedicated MIDI controller is connected to a DAW such as Mixbus via a MIDI interface. Running a Virtual Instrument plug-in within Mixbus replaces the dedicated tone module. The audio output from Mixbus can be routed to an internal DAC / sound card or to an external audio interface. 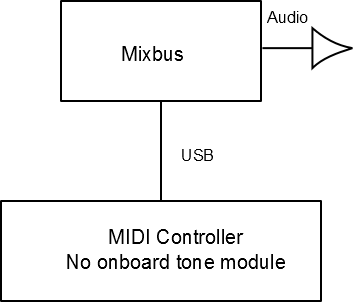 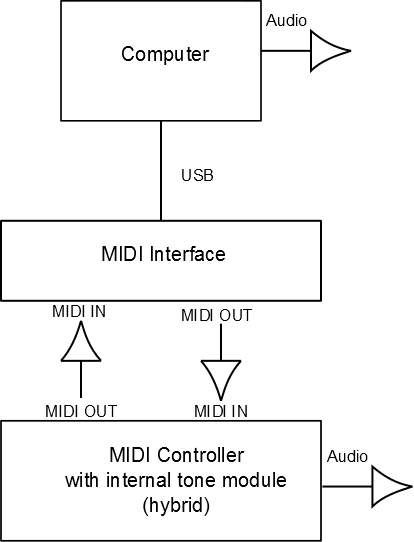 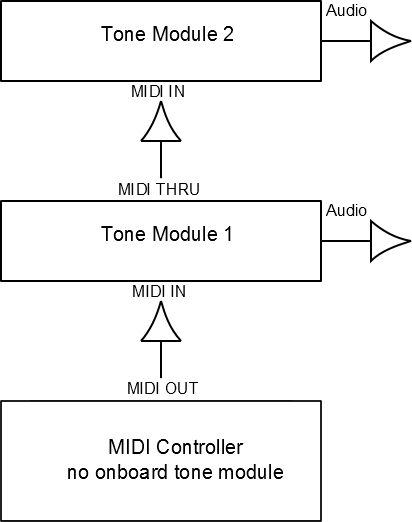 Fig. 5 above: This is an example of a daisy chain configuration. A dedicated controller sends MIDI messages to the first tone module which in-turn sends a copy of the signal to the second tone module. If the chain is carried out too far, the signal will degrade and become unreliable. 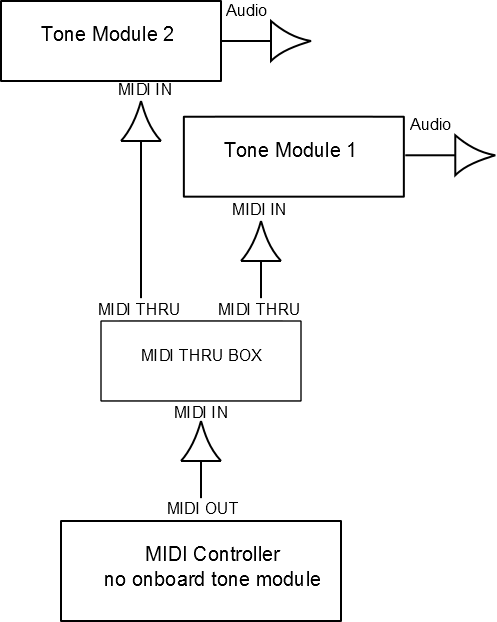 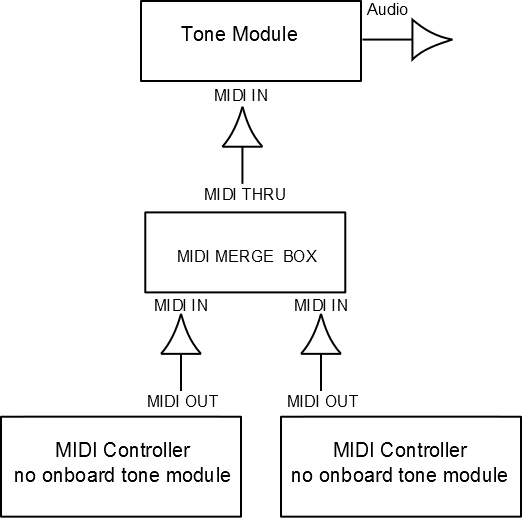 Fig. 7 above: A merge box allows 2 MIDI controllers to send MIDI messages to a single tone module. An example of this configuration could be that one of the controllers may be a keyboard and the other controller could be a string instrument both playing together into one tone module.

The Interface From MIDI To Mixbus

You will typically need an audio interface with MIDI I/O as in figure 2 or 4 above, or you may opt for a USB or FireWire connection as in figure 3. Of course you will also need need a MIDI controller. Although you can input data straight into Mixbus via the various tools provided in the software, it can be an inefficient method for recording an entire performance. These tools are best suited for making adjustments to an already captured performance or for step entry.

above: some of the tools offered in Mixbus
below: the on screen keyboard (right click the MIDI track rec button)

What MIDI Controller Should You Get?

Only you can decide what is best for you, but if you are new to MIDI a keyboard controller is a great choice for general purpose use and by far the most popular because of its flexibility. You will want to consider the number of octaves you would like the keyboard to cover. An alternative to a MIDI controller would be a synthesizer, one that generates MIDI messages and can also contains its own tone module. But because it can produce its own audio, it may cost more, take up more space, and be heavier. If you like the sounds a MIDI hybrid makes, and if it has line level outputs, you can record the audio straight into Mixbus via an audio interface as shown in figure 4 above.

To record a MIDI performance into Mixbus, first add a MIDI track. If you would like to hear your performance thru Mixbus then be sure a Virtual Instrument plug-in is in the redirect box. You can use Plug-in Manager to do this (by default a MIDI track will be created with the “Reasonable Synth” plug-in already in place).Then, in the MIDI Connection Manager, confirm that your MIDI input device is connected to the track you wish to record to. Record arm the track and click the master record button located in the transport section. Once the transport rolls you will be able to record your performance. MIDI messages will now be captured into Mixbus.