Some virtual midi instruments provide more than stereo outputs. This allows (for example) a drum instrument to provide a separate output for each virtual “microphone”.

The different plugin formats behave differently for multichannel outputs. AU instruments can have a variable number of outputs; while VST instruments, and Mixbus’s bundled LV2 instruments, pre-define how many channels they can support.

When a multichannel instrument is created, you want each sound to appear on its own mixer strip in Mixbus. Rather than make these connections yourself, it is much faster to let Mixbus do these connections for you. Mixbus calls this feature “Fan Out”.

*There is a conventional among VST and AU plugins that the “Fanned out” buses should be stereo pairs. Starting with v5.3, Mixbus creates stereo buses and connects them to each pair of instrument outputs. (the bundled Black Pearl and Red Zeppelin kits are smarter, and can create a mix of mono and stereo outputs)

!If your instrument does NOT use stereo outputs (Addictive Drums is one example) then you’ll have to visit “Window->Audio Connections” and assign your outputs to both the left&right inputs of the desired track. Perhaps in the future we will add an option to create mono tracks instead of stereo tracks.

Setting up a multichannel instrument with fanned-out tracks:

To utilize these plugins in multichannel mode, it is necessary to initiate the operation from the “Add Track” dialog:

And then in the “Plugin Setup”, select ’9 Channels’ and ‘Fan Out’ (these are enabled by default) 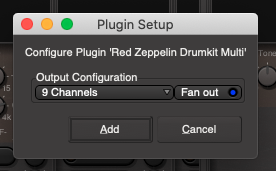 …this will result in 9 additional tracks. In the bundled drum plugins, each resulting bus will be labeled with the drum it represents (kick, snare, etc). In third-party plugins, the resulting buses will be numbered 1….N.

!In versions before v5.3, Mixbus created “buses” instead of tracks. But it is desirable to “print” the drum tracks to audio, once the major arranging is done. This future-proofs the session, in case the instrument is no longer available. It also allows fine-grained editing, just like real drums.

Other operations and their effect on multichannel instruments:

Once the arrangement is complete, you can print the instrument outputs by record-arming the tracks, record-arming the master rec-enable and rolling through your song. Once you’ve printed the tracks to audio, you’ll need to switch the track monitoring from “IN” to “DISK”. The fan-out process forces the monitor to INPUT so you can hear the tracks without having to rec-arm them.