What is a Virtual Instrument?

Virtual Instruments (VI) are plug-ins that convert MIDI performance data (notes) into sound. Otherwise Mixbus treats them like a normal plug-in. They can be inserted anywhere in the channel’s signal flow. This allows you to insert a MIDI-generating plug-in, or a MIDI “filter” plug-in before the VI. But normally, you should ensure that the VI is the first plugin at the top of the redirect list.

How do I create a Virtual Instrument track?

When you create a new MIDI track, there is a menu selection for the Instrument you would like to use on this channel. By default, the instrument will be inserted at the top of the redirect list.

*It is also possible to create a MIDI track without a virtual instrument. In this case you will likely send the MIDI output to a hardware synthesizer, and return the signal into the MIDI track’s audio inputs (or whatever track(s) you choose). See Setting up an external MIDI device

What can I do with a virtual instrument?

Just like a plugin, you may double-click on the VI to display its custom user interface.

!In most cases, the fader, EQ, and Compressor elements should come AFTER (below) the Virtual Instrument in the channelstrip, so they can operate on the audio stream created by the VI.

*Note that because the VI is in the plug-in window, after the channel’s input, the input trim is not effective on the VI. Most VI’s have their own internal volume control which can be used as a trim.

By default, Mixbus creates virtual instruments in their “stereo output” mode (or “mono” if that’s the only option they provide). Some plugins provide multiple outputs; for example you can configure the kick drum to appear on a separate output than the snare drum. This is a fairly complicated topic for advanced users. See: Multichannel instruments

In some cases, you might have multiple tracks with MIDI data, and you want all of the tracks to feed a single instrument. To do this, you should create multiple MIDI tracks, with no instrument. Then create a single MIDI “Bus” with the desired instrument. Use this image as a reference 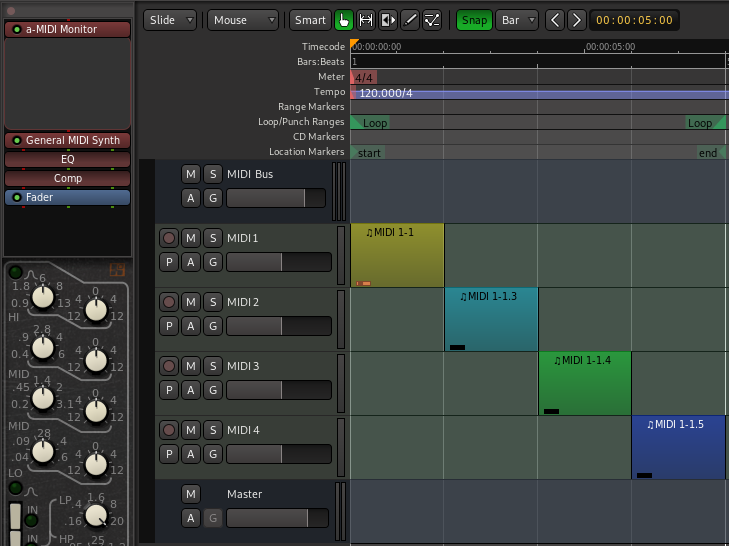 In this image the 4 MIDI tracks are ‘feeding’ the MIDI Bus track at the top. The MIDI tracks themselves do not have instruments on them, but have MIDI data in regions on the track that will flow to it

Finally, connect the MIDI outputs of the tracks to the input of the MIDI bus. As shown in this image. 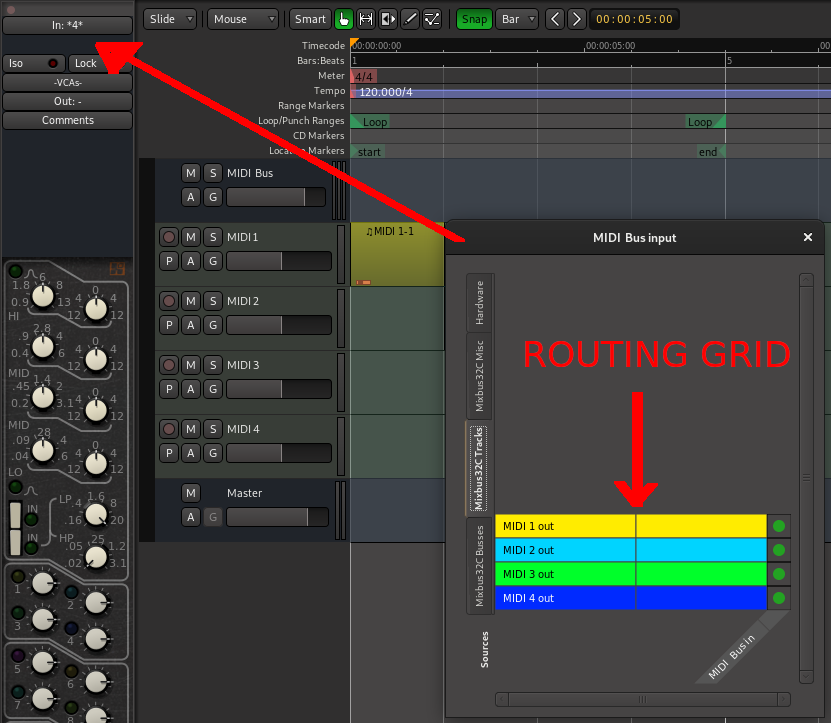 The MIDI “bus” will sum (merge) the inputs of several MIDI tracks, and provide the resulting MIDI stream to a virtual instrument.

*If your VI is multi-timbral, each MIDI Track can be set to output to one or more channels of MIDI by right clicking the MIDI Track and choosing the ‘Channel Selector’ menu option. There you can chose from one or more of sixteen MIDI channels.