XT-TP “Tremolo Panner” is a creative modulation effect similar to guitar stompboxes, and including effects of “slicers” and “harmonic tremolo” pedals.

*This plugin requires a license to enable the control panel. To purchase a license, visit Harrison’s XT Plugin Page

Unlike a traditional tremolo, where the modulation is free-running, the XT-TP provides multiple methods to sync the modulation LFO to the session’s playhead position. This makes it particularly useful as a production&mixdown effect, because it always sounds the same on playback.

Best when used on: Guitars, Keyboards. Can also be used as a gating/pumping effect for drums. 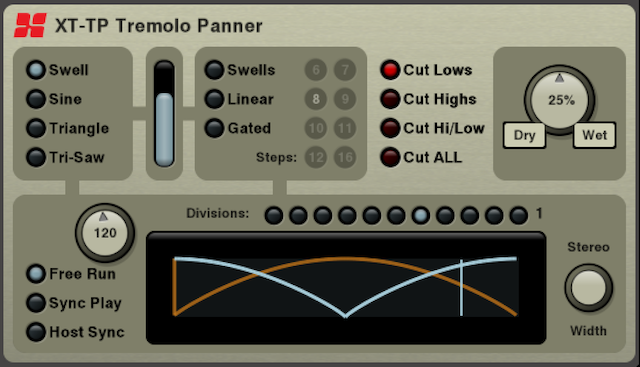 User Shapes: enabling one of these shapes will display controls for the user to draw their own oscillator waveform shape

Modes: Select one of 4 main modes:

BPM: the BPM knob is used to set the rate of the oscillator.

Oscillator Display: this display shows the oscillator shape, as well as a vertical line representing the current position of the oscillator value. Click & drag on the oscillator display to adjust the “phase offset* of the oscillator. This allows you to synchronize the modulation to emphasize a particular rhythmic pulse in the plugin’s input signal.

Divisions: Each LED indicator represents a different subdivision of the base tempo. Use these settings to increase or decrease the oscillator speed, while matching the tempo to the music. Select different ratios (1/12 or 2/3 on a 4/4 meter) to create polyrhythms in the modulation.