XT-VC Vocal Character is an effect similar to the XT-BC Bass Character except it is optimized for vocals.

*This plugin requires a license to enable the control panel. To purchase a license, visit Harrison’s XT Plugin Page

The Vocal Character operates by detecting each musical note sung and then applying an eq to make the note sound fuller and brighter (or weaker and duller, if needed).

Best when used on: Vocals

*NOTE: the XT-VC is for mono tracks only. 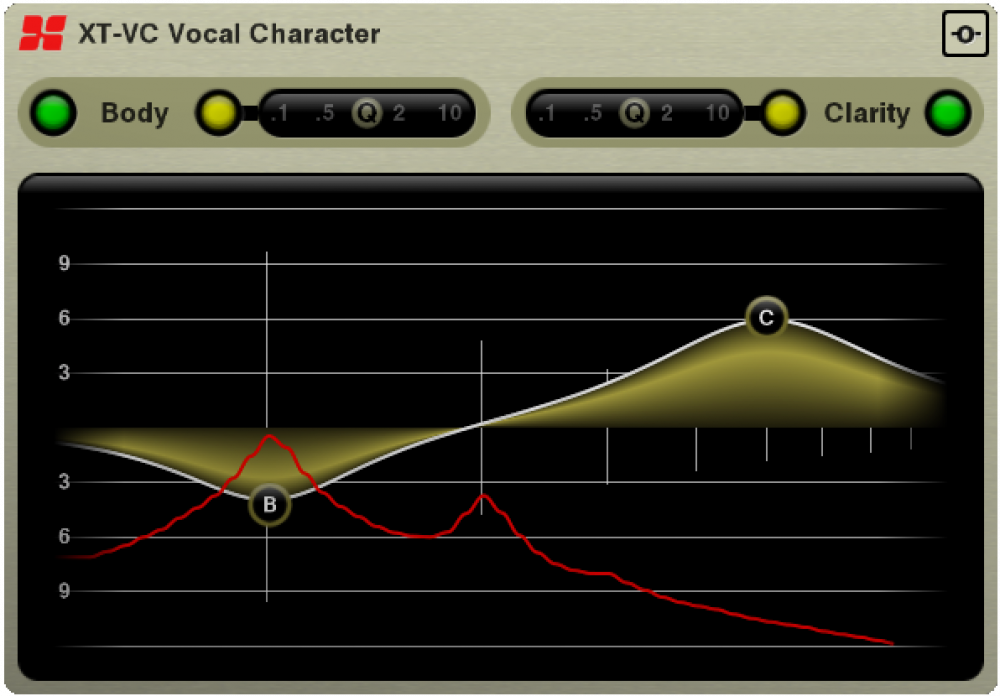 The Vocal Character plugin operates like an EQ, but with one difference: the EQ isn’t set at fixed frequencies, but rather the eq is applied to each detected note.

The red “spectrum” curve shows the harmonic content of the detected note. The leftmost line indicates the “fundamental” or first harmonic of the note. Each vertical line to the right indicates an additional harmonic (2nd harmonic, 3rd, etc). You can use this graph to determine the balance of an instrument: whether it has too much or too little fundamental, for example.

The XT-VC plugin has 2 EQ bands: “Body” and “Clarity”. These bands are identical except that the “Body” control is a low-shelving EQ by default, while the “Clarity” band is a high-shelf EQ.

Peaking switch: The yellow button changes the band to a peaking.

Q slider: when the Peaking switch is engaged, the Q slider engages, and adjusts the Q ( sharpness ) of the band’s filter.

Momentary Bypass: the top-right corner is a momentary-bypass button. Press this button to temporarily bypass the effect. Releasing the button will re-apply the effect.